On the left is the 80 Watt Mitsubishi RF module. 50mW of drive for 80 Watts output.

In the centre is the low pass filter, forward and reflected power detector as well as antenna switching relay.

On the right side is the power supply which incorporates the Voltage regulators, transmit/receive switching plus over-Voltage and reverse polarity protection from the power source.

The original rear panel of the Wagner HF radio is a block of 12mm thick aluminium which had the 100 Watt Power Amplifier board mounted to it. A piece of aluminium plate was cut to size and bolted to the external face to cover the original holes of which there were many. Before attaching the aluminium plate permanently a rectangle was 'nibbled' out to allow the finned heatsink to be bolted directly to the aluminium rear panel with some heat conductive compound 'sandwiched' between the two surfaces. The image above is the MC145152 PLL synthesiser. The pre-scaler IC is an MC12017. In receive mode the VCO operates at receive frequency minus 10.7 MHz and at the carrier frequency of 146-148 MHz on transmit. The reference frequency is 5 KHz. After debugging and testing, the board was enclosed in a box made from copper clad fiberglass board shown below. The output level is +6dBm. The two SMA connectors on the side of the enclosure are connected to the receiver local oscillator and the transmitter exciter. The above image is the receiver board which I built first in April of 2020 and marked the beginning of the project. The circuit of the receiver is similar to the one used in a two metre transceiver kit offered by a U.S. company called Ramsay Electronics many years ago. My receiver has a 10.7 MHz first I.F. amplifier followed by another at 455 KHz. The I.F. bandwidth is +/- 5KHz. An MFE131 dual gate MOSFET was chosen for the R.F. amplifier with bandpass filtering before and after. The coil formers and cans were removed from the remains of an old commercial two-way radio known as the Communico 250 manufactured in the late seventies. The audio amplifier is an LM380 which has sufficient audio output for the intended purpose. These days with world wide DMR communications being very popular in ham radio circles and the use of analog technology on the decline, I thought I had better build an FM analogue two-way radio to use on the local two metre FM repeaters before they all disappear. This idea also spurred on because I had a collection of Motorola integrated circuits I bought many years ago. The part numbers are MC13135 (receiver) and MC145152 (PLL). Another motivation being to improve my very limited Arduino programming skills as well as better understand how to program the PLL and dual modulus divider combination. The PLL is controlled by an Arduino Nano and two serial to parallel shift registers are used to load the divide by N value into the PLL IC.

The transmitter's exciter is fairly simple with just two stages of RF amplification at 146 MHz prior to the 80 Watt Mitsubishi RF power module used in the final stage. The FM modulator circuit is based on an Australian made commercial two-way radio from the late 1970's. It was known as the "Communico 250". The radio was manufactured by the company I worked for back in the day. The coil formers and cans in my radio were removed from a 250 radio.

The complete radio transceiver is being built into the case of a Wagner commercial marine HF transceiver also once made in Australia (A photo of a Wagner at the bottom of this page). The case is a bit large for the new purpose but it provides ample space for additional options as I think of them.

My plan is to use the radio as a base station at my QTH and get involved in some local two metre activity since recently installing a dual band roof top base antenna for 2 metres and 70 centimetres.

A new sub-chassis and front panel was made for the old Wagner radio enclosure above. The Arduino Nano PLL controller can be seen on the right hand side. An LCD display connects to the controller. The display shows the receiver operating frequency, the channel step size of 5, 10, 25, 50 or 100 KHz as well as the transmit mode in relation to the displayed receive frequency. ie. -600KHz, Simplex, +600KHz.

The block diagram shows the basic functionality of the planned design. Nothing unusual for a simple homebrewed transceiver using old technology. As with all homebrewed projects I'll make some changes along the way. I hope to add a channel scan feature to monitor local repeaters and simplex channels.

The two images below are the exciter PCB component and solder sides prior to the components being placed and soldered. The exciter is partly based on a commercial two-way radio design form the late nineteen seventies. It comprises the FM modulator and the 144 - 144 MHz RF amplifier stages including band-pass filtering prior to the final amplifier. All but one of the PC boards in this project were made using the toner transfer method. The exciter amplifies the +6dBm signal from the synthesiser output to approximately +17dBm and provides bandpass filtering prior to the final amplifier stage, an 80 Watt Mitsubishi broadband amplifier. The filter circuits are centred on 146 MHz plus and minus 1.5 MHz. This just covers the FM portion of the Australian 2 Metre band.

The lower portion of the PCB contains the microphone pre-amplifier and speech clipper circuitry. The output of this circuit is connected directly to the synthesiser's VCO.

There is provision to apply a CTCSS signal to the modulator after the diode clippers. I found an old Selectone CTCSS encode that I will set up on 91.5Hz for the local repeaters.

As the exciter is really just an amplifier at 146MHz, I was able to tune it with a spectrum analyser and tracking generator to almost achieve the required bandwidth of 4 MHz to cover the whole 144 to 148 MHz two metre band. The 2nd and 3rd harmonics are more than 50dB below the exciter's +17dBm output level.

Whilst my circuit works well, I am considering an alternate design that uses a 3 stage helical resonator followed by an MMIC as the amplifier stage. The main advantage will be a broader, flatter response from the helical filter so performance will be equal across the entire 144-148 MHz band. 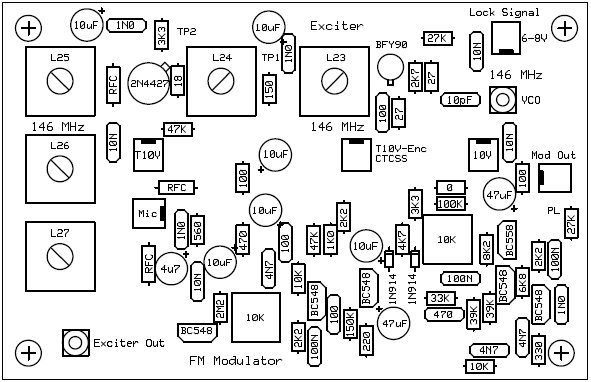 To the right is the new front panel which replaces the original Wagner radio's' front panel. A few more holes still need to be added to accommodate all of the switches needed. Another panel will cover this one and will hide the screw holes around the speaker and display.

The Arduino PCB that controls the PLL synthesiser has been redesigned with extra sockets on the board to provide connection to the previously unused I/O ports of the Nano board. The original board was adapted from a DDS VFO board. The reason for new one is to allow additional control of the transceiver such as memory storage of local repeaters and simplex channels etc. Another feature will be VFO or memory scan as well as monitoring the synthesiser to disable the transmitter in the event of the synthesizer becoming unlocked. The version 1 receiver board is to the left and the transmitter exciter board is on the right. These are located on the underside of the transceiver's chassis. The CTCSS encoder is fixed at 91.5Hz which is a commonly used frequency for local repeaters. It can be seen mounted vertically on the 'L' shaped aluminium shield to the immediate left of the exciter board

The front panel has been completed and has numerous controls including:- On the right is a close-up of the receiver's RF pre-amplifier circuit board. The active device is an MFE131 dual gate MOSFET. It provides around 16dB of overall gain taking into account input/output filtering losses. The bandwidth is broad enough to cover the whole band.

To the right is the rear end of the transceiver minus the Power Amplifier stage. The circuit board to the right of the photo is the receiver RF pre-amplifier. After a couple of small modifications to the FM modulator circuit to reduce the audio output level, I was able to have my first QSO on this radio today on the 20th of September 2020 (five months after starting the build), with Richard VK2FRKO via VK2RGL, the Great Lakes Radio Club repeater on 147.100MHz. The repeater is about 75 kilometres from my QTH on Cabbage Tree Mountain. I received very complimentary reports on the transmitter audio.

A fascia plate with lettering for the controls will be placed over the existing front panel seen above. Prior to putting the radio on-air, I measured 80 Watts of RF output from the transmitter and a receiver sensitivity of .15uV for 12 dB SINAD. Transmit deviation was set for +/- 5KHz.

I'm very pleased with the results today but much work still needs to be done on the software to provide for some channel memories for local repeaters as well as a channel scan feature.

I have to say it has been worth the time and effort to have a radio that is simple to operate and doesn't have a heap of menu functions that are buried one below the other. 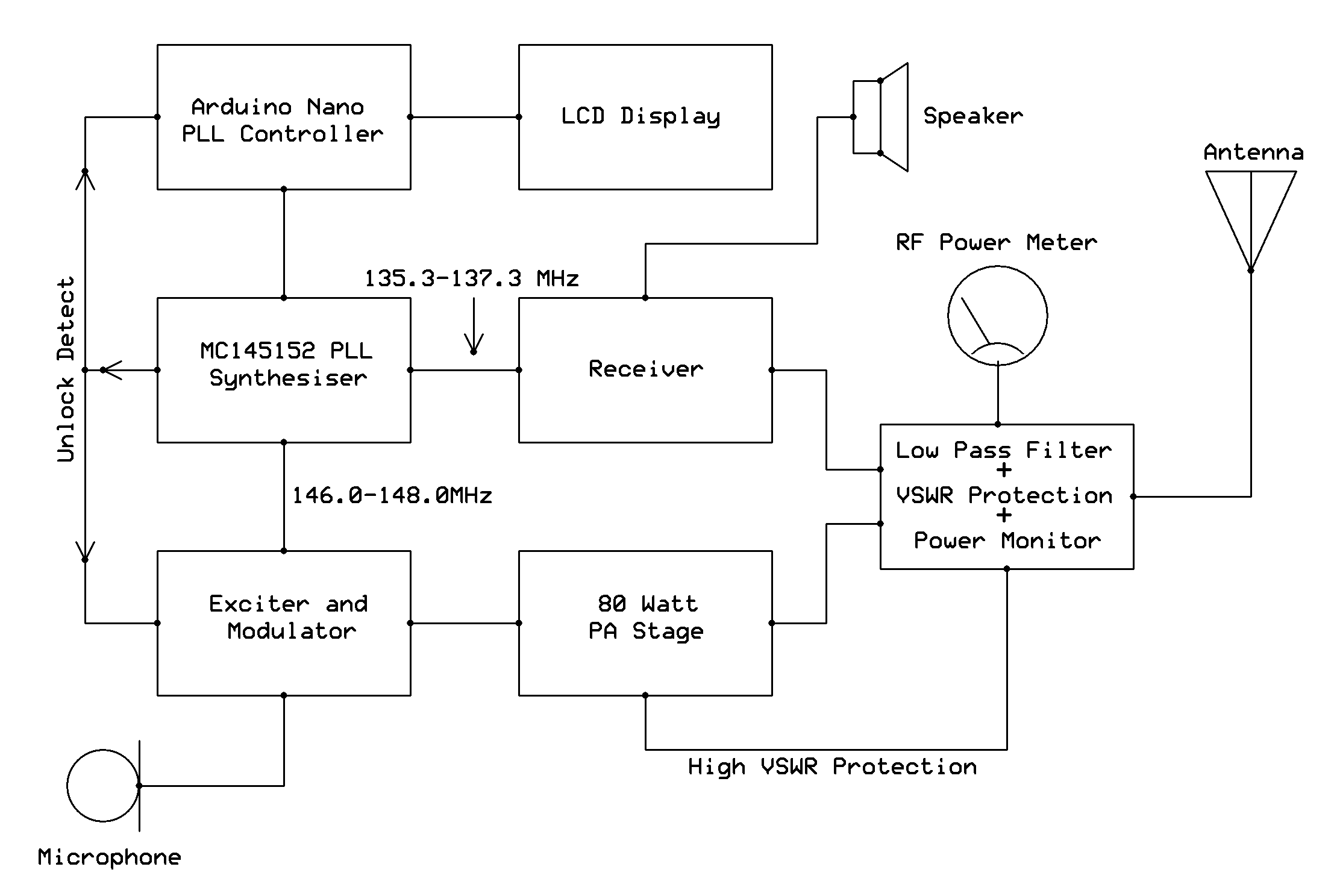 To the left is a photo of a Wagner 829M HF marine transceiver identical to the one I scrapped in order to use the case and chassis for this project. These were manufactured in various configurations over the years but this one was probably the most common version. Not long after completing the transceiver I decided to redesign the exciter to improve the performance across the entire band from 144-148 MHz. To achieve this I used a helical resonator purchased from Temwell Corporation in Taiwan. Yes helical resonators for the ham bands are still manufactured! The new exciter uses the same modulator circuit but the RF portion has been totally rebuilt. I am very pleased with the improved bandwidth as the RF output is now flat from 144-148. Below are some photos of the new exciter PCB. 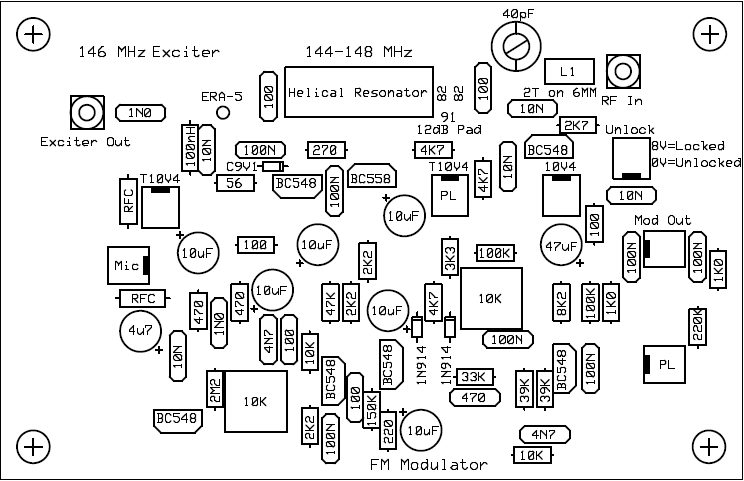 Construction of a MkII receiver board has commenced. It will use the same type of helical resonator that was used in the MkII exciter. The new receiver will also have an extra 10.7 MHz crystal filter for better selectivity and a transformer to match the first mixer output impedance of 330 Ohms to the filter's 3000 Ohms. The crystal filter part number is 10.7M15B, manufactured by ECS. Another feature is  an external mute control line to mute the receiver during transmit periods. This version of the receiver is nearing completion but yet to be powered up an tested. The toroid inductor near the centre of the board is a T50-6 and is configured as a transformer to impedance match the crystal filter to the output of the first mixer. A shielded transformer would have been better suited here but I did not have one on hand. If need be, I will make a shield to go over the toroid. The other change of significance is the 3 stage helical resonator at the top, left of the board. I have also adopted a 2 stage inductive coupled bandpass filter in one can at the output of the RF amplifier.

The new receiver has been completed, tested and fitted to the transceiver. The sensitivity is the same as the original, which is not outstanding without the outboard RF pre-amplifer, however the bandwidth is now sufficient to cover the entire 4 MHz of the two metre band with equal sensitivity. As an experiment, I modified the original receiver by adding a simple one transistor IF amplifier stage between the output of the MC13135 first mixer and input to the crystal filter and the sensitivity is now .2uV for 12 dB SINAD. A worthwhile improvement in my opinion as the RF pre-amplifier is not required except on the odd occasion when a bit more sensitivity may be of benefit to pull that DX signal out of the noise!