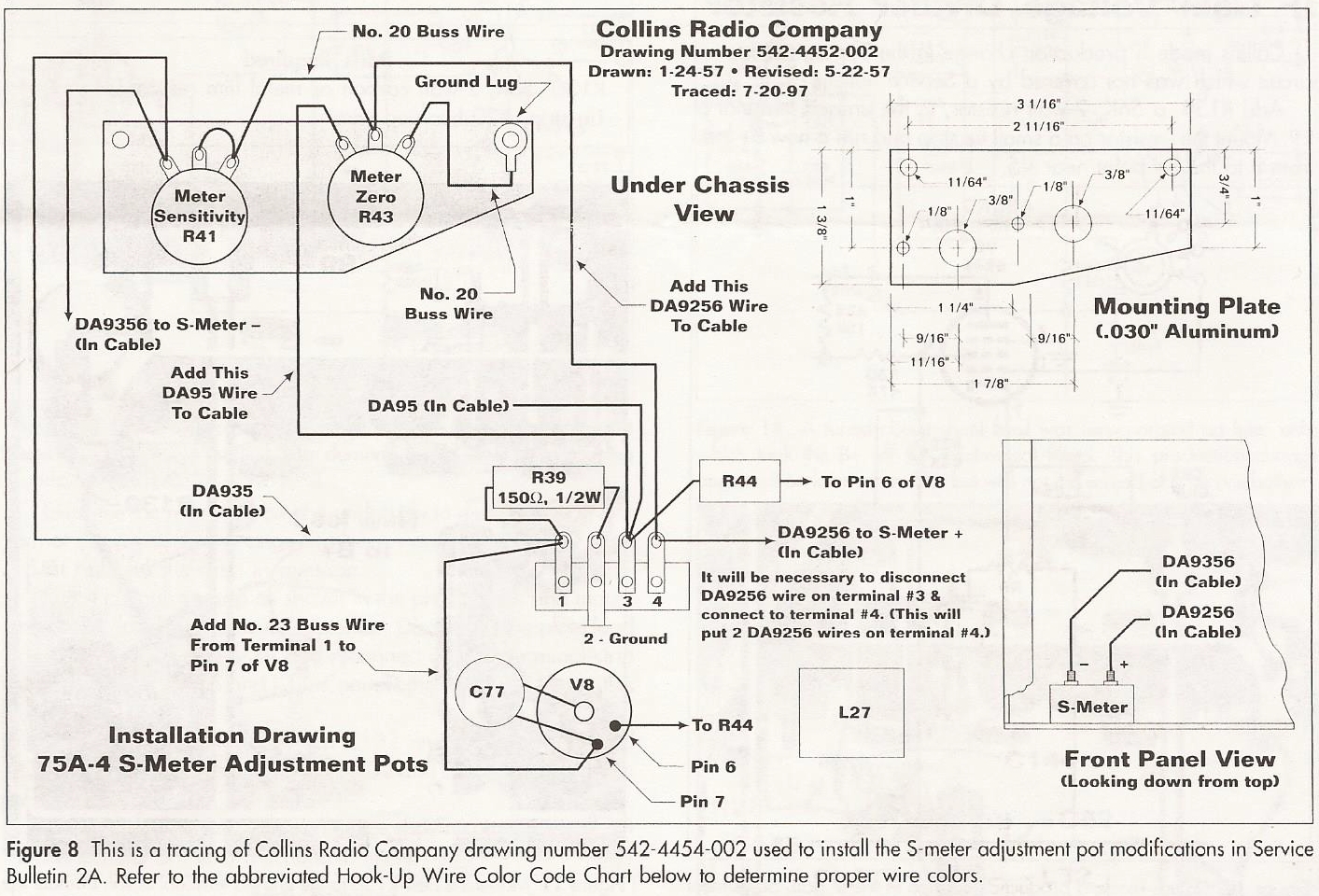 S-Meter circuit modifications as per the service bulletin SB-2A dated late 1955 have been implemented. Using the dimensions from the drawing below, the mounting plate for the potentiometers was cut from a piece of scrap aluminium with tin snips then the edges were filed. Two new 500 Ohm potentiometers were purchased from an on-line supplier. I also bought a new 2.5k Ohm potentiometer for the I.F. gain pre-set.
There are currently only two mechanical filters installed, giving switchable I.F. bandwidths of 3.1 kHz and 2.7 kHz. I intend to source a narrower 2.5 kHz for SSB and a 6 kHz filter for A.M reception.  The plan is to have 6.0, 3.1, 2.5 kHz I.F. bandwidths available. 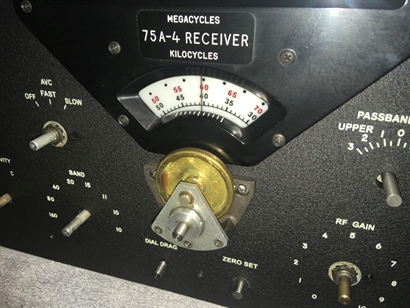 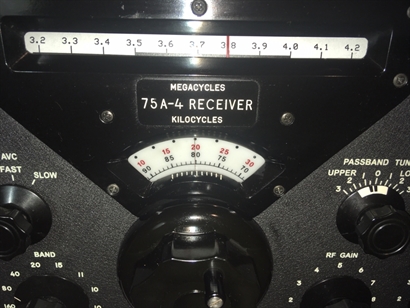 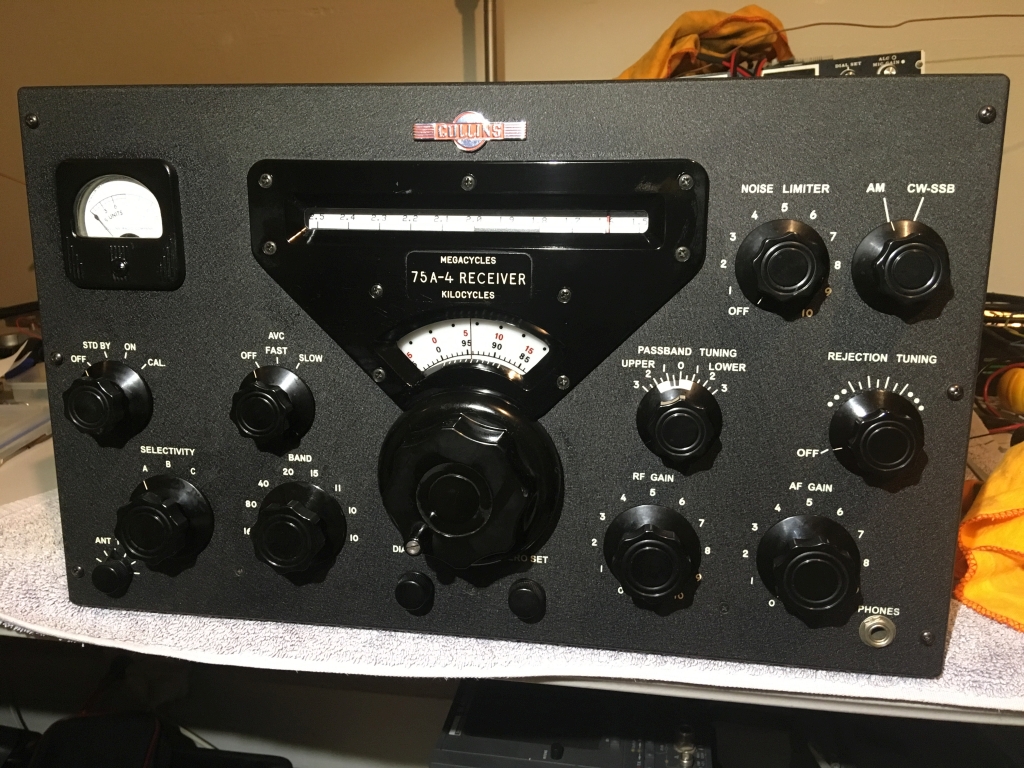 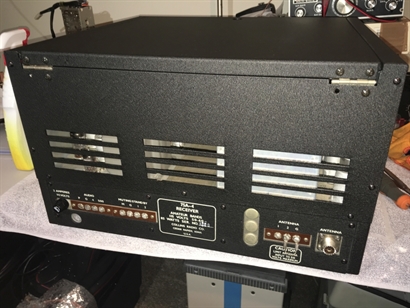 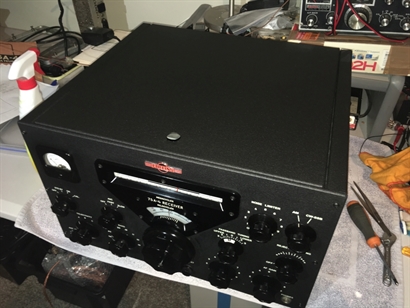 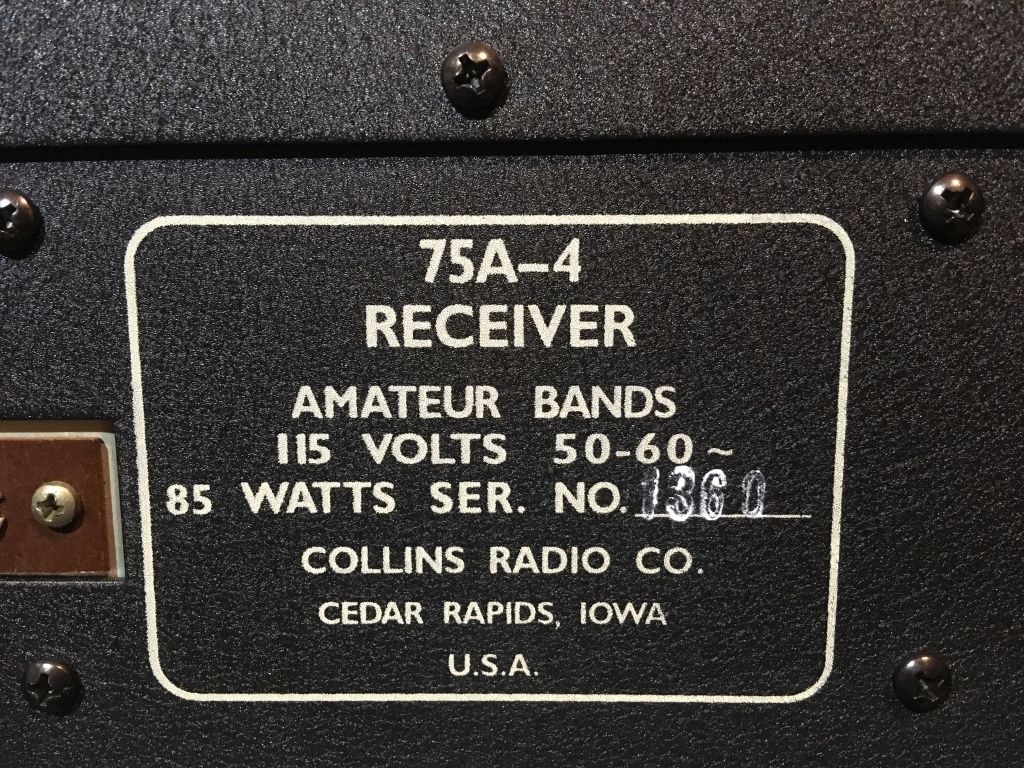 After 5 years of being disassembled, the 75A-4 is coming together nicely. I need to replace the figure 8 power lead as the original was showing its age. A 3 core type with an earth wire will be used for safety purposes. The dial mechanism needed a small mount of lubrication as some squeaks were quite loud as the VFO knob was rotated through the range. 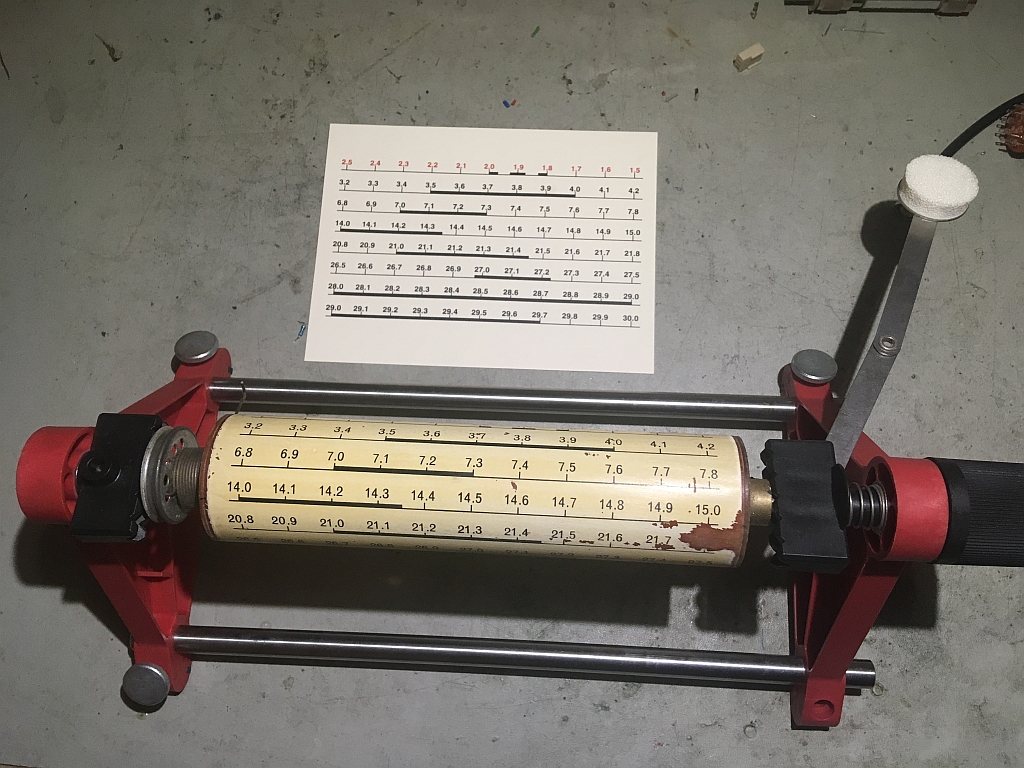 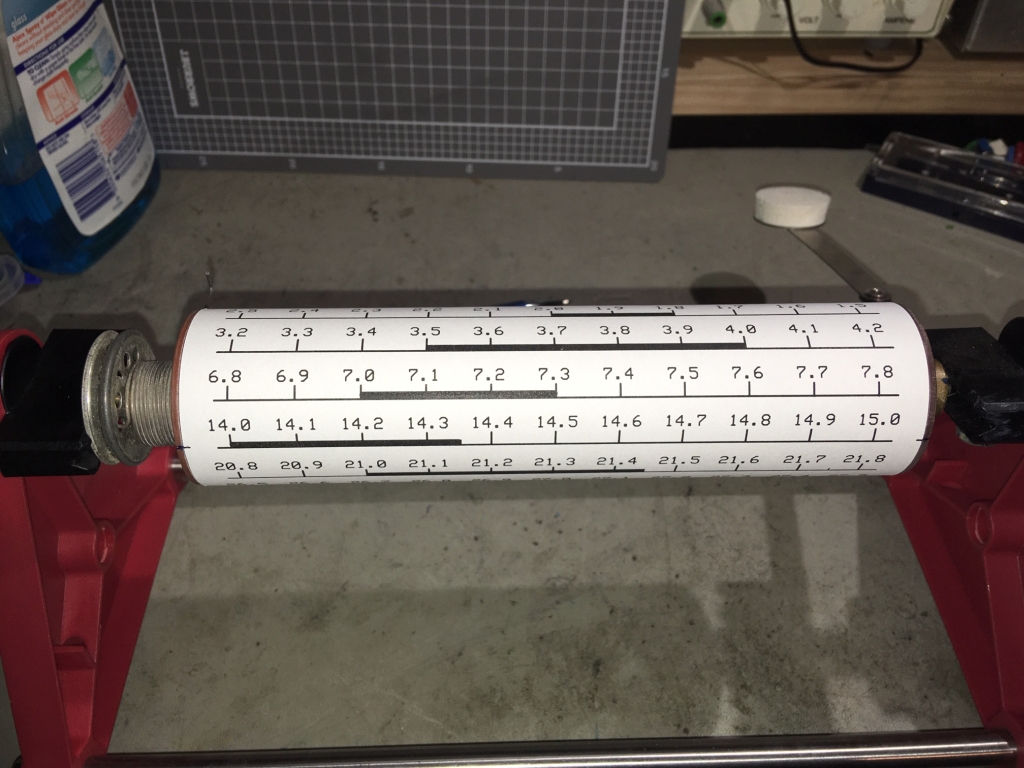 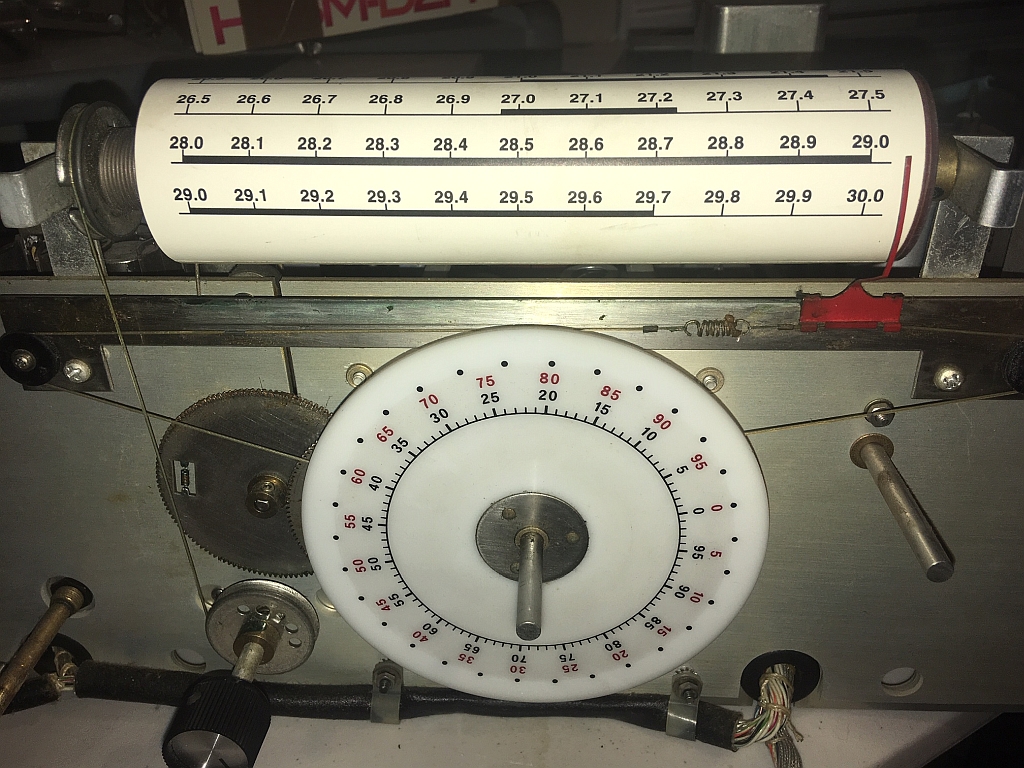 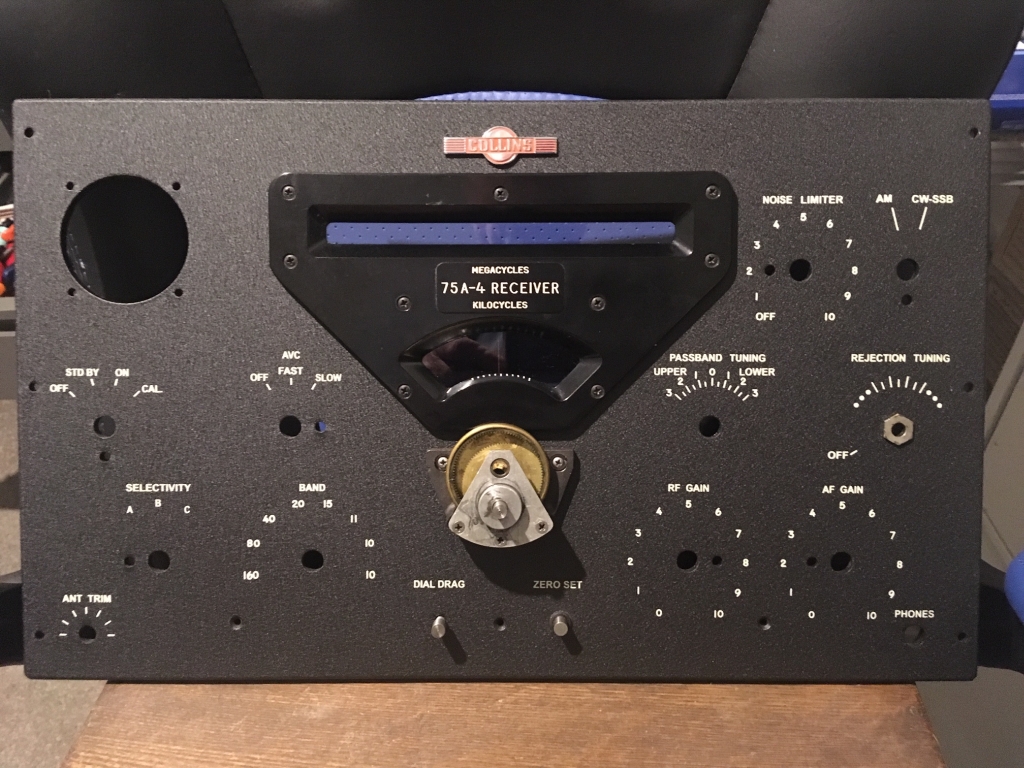 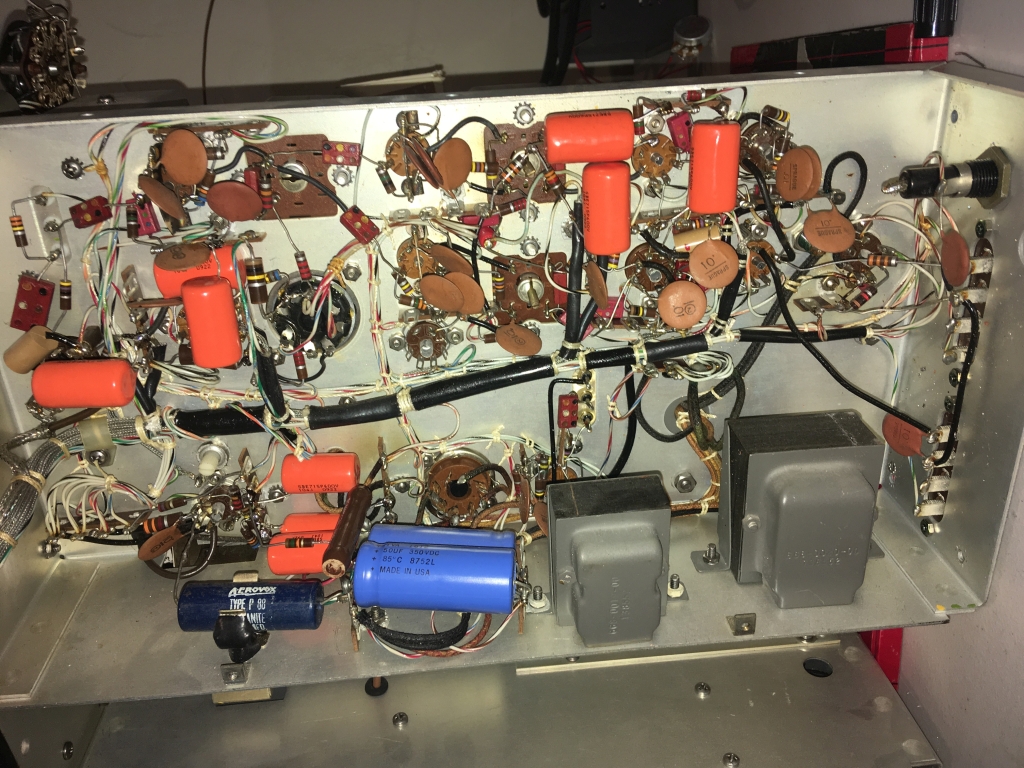 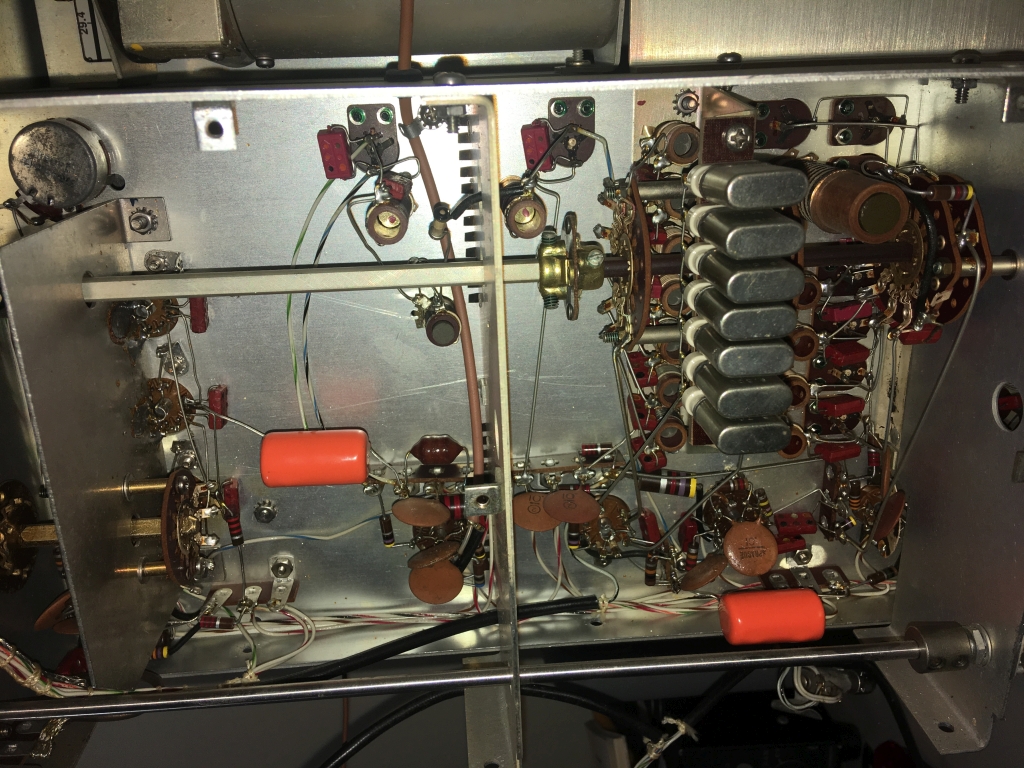 Below images show the drum dial before and after the original overlay being replaced with a homebrewed new one. The front panel is being reassembled and the eleven black 0.1uF capacitors have been replaced. 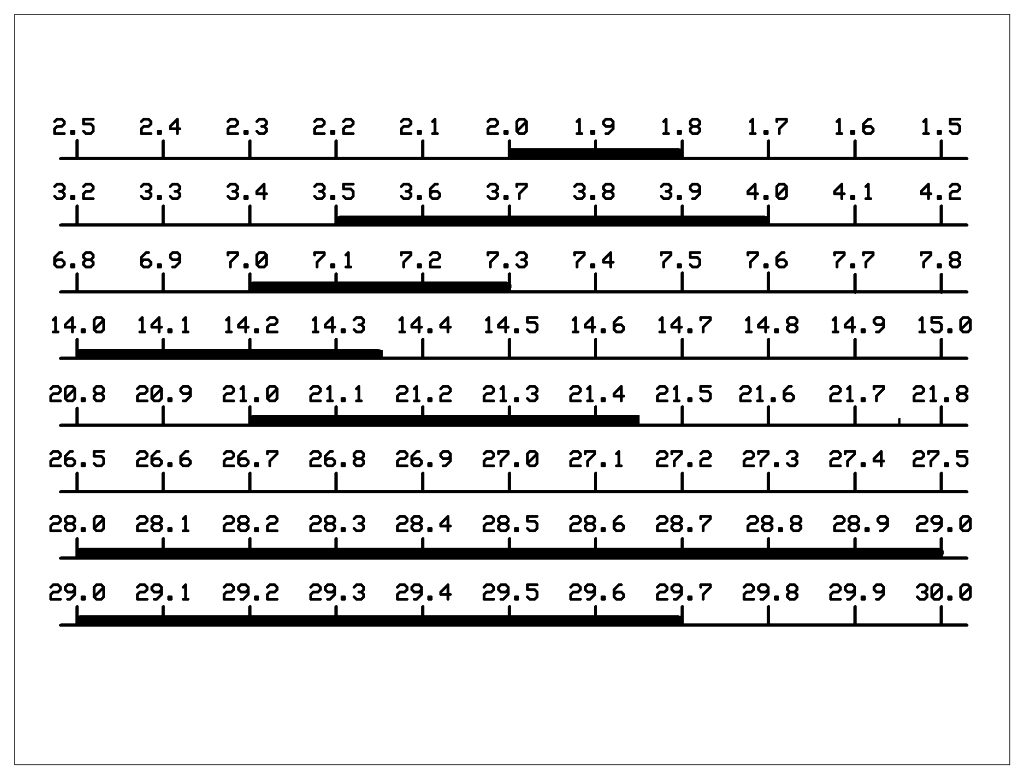 I decided to have a go at producing a new dial drum overlay for my 75A-4 receiver using Express PCB software again. The result was quite good in my opinion. I had a template to work from to make all of the measurements. The 15 metre band was different between early and later model receivers. Later models started at 20.5 MHz and earlier production models started at 20.8 MHz as I understand it.

Sometimes I've been known to have a considerable break half way through a project so the photos below were taken to assist me when I have renewed interest. I find it helps if one has  a reference  to identify the connection points after components have been cut out prior to replacement. As this radio is an early production unit it will need to have some updates  to the circuit that later production units benefited from. A number of coupling capacitors have been replaced with silvered mica types. The s-meter reading drifts  quite a bit so hopefully this can be fixed when some of the updates are done.
The very first time I laid my eyes on one of these receivers I just had to have one. I acquired this 75A-4 receiver with serial number 1360 around the year 2006. It was in good condition for its age at that time but not pristine. I worked out that it was manufactured in late 1955. However it was badly damaged in 2010 when some home intruders pushed it off the shelf where it resided in my shack. There is a photo below showing it on the floor. Most of the damage occurred to the cabinet & paintwork as well as the two glass dial windows, S-meter and knobs. It was left that way for four years until 2014 when the case was removed from the radio, packed up and sent to Howard Mills, W3HM in the U.S.A. Howard specialises in radio restorations including refinishing Collins 75A-4 enclosures. The refinished cabinet panels arrived a few months later but no further progress was made on the restoration until 2019 when I developed some interest in making this receiver functional again.
The multi-section electrolytic filter capacitor in the power supply has been replaced as well as all of the black 0.1uF capacitors which are used mainly for D.C. supply rail bypass purposes. I have acquired a replacement S-meter as well as a two new pieces of dial glass. A replacement label was made and fitted to the revolving dial drum as the original was very yellowed and tired looking.

I'm really pleased with how this fine old radio has come up after the restoration.

It looks, feels and smells like a real radio should. I wish I still had the KWS-1!

As this is an early production receiver, the original circuit design allowed the receiver's B+ onto the filter input so the modification described on page 7 of the "Technical Data Sheet" above was done to isolate the filter from the receiver's H.T. supply.

In late 2019, a 6 KHz and 2.4 KHz bandwidth filter was purchased for the receiver. (I know the photo shows a 2.5kc filter and that's what was ordered but I received a 2.4) They are Rockwell Collins filters that are repackaged by Dave Curry into a 75A-4 style filter case. These filters are sold via the KE9PQ on-line store. They arrived a couple of weeks after the orders were placed and installed in the receiver soon after. AM signals can now be tuned in clearly with 6KHz filter rather than using the 3.1 KHz filter which was intended for SSB. The 2.4 KHz filter sounds clear and crisp on SSB. The plan is to have 6, 3.1 and 2.4 KHz filters in the three available positions.

To finish off, I swapped out a few of the original tubes with some spares I had on hand. It had been years since I acquired the spare tubes and some of the them looked like they had already been used. By me no doubt! The replacements did not make a huge difference to the R.F.  performance but swapping out the 5Y3GT rectifier made a big improvement to the warm-up time and cured some odd popping noises that would occur during the first 30 seconds after switch on. The original 6AQ5 audio output tube was also low in emission and fitting a replacement made a noticeable improvement to the audio output level.

The photo to the left shows C68, the plate coupling capacitor, from V6. It is in a difficult location to access. I removed the left side cover from my receiver to access this area. Its value is 470 pF which I replaced with a silver mica type. 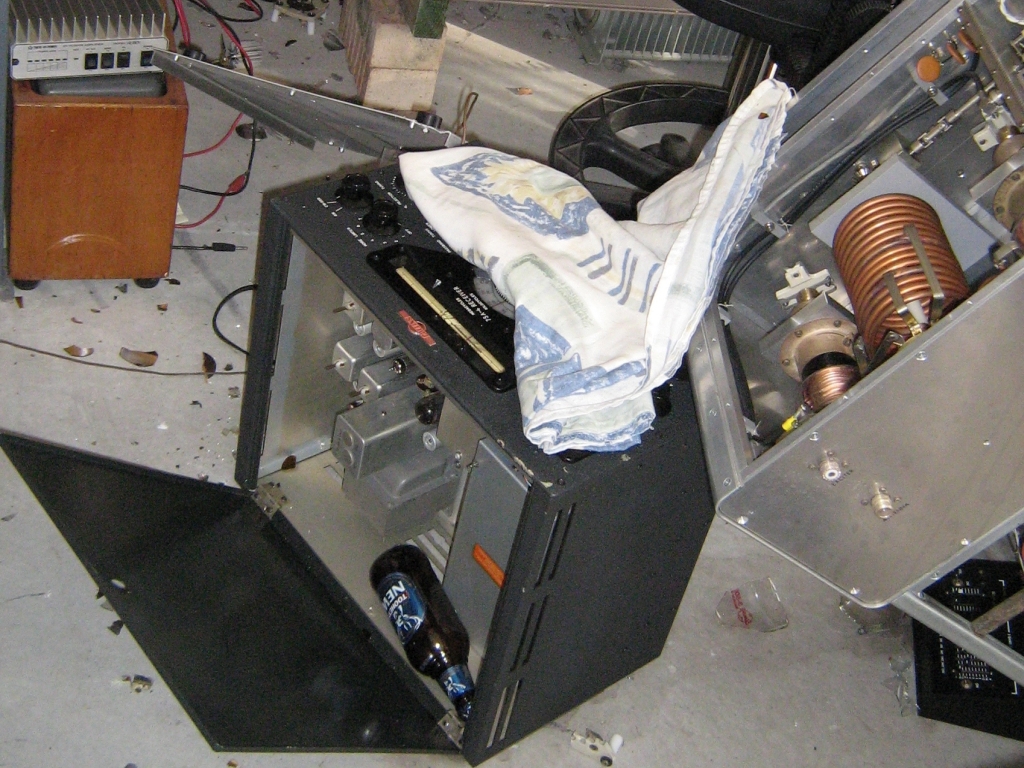 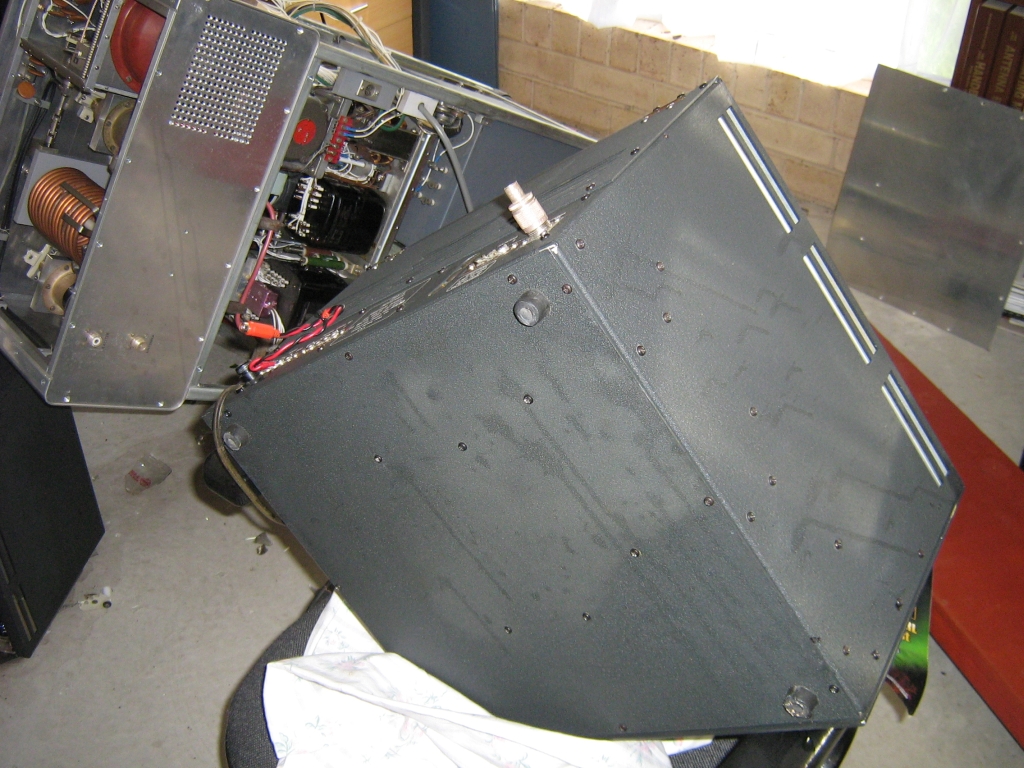 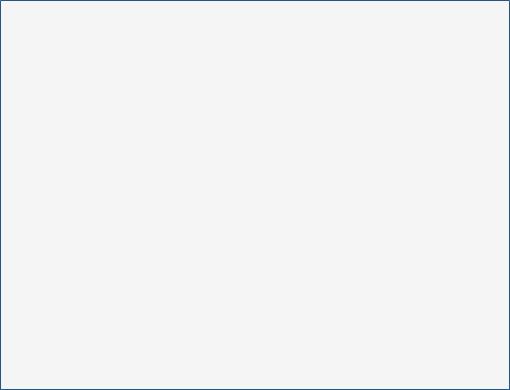 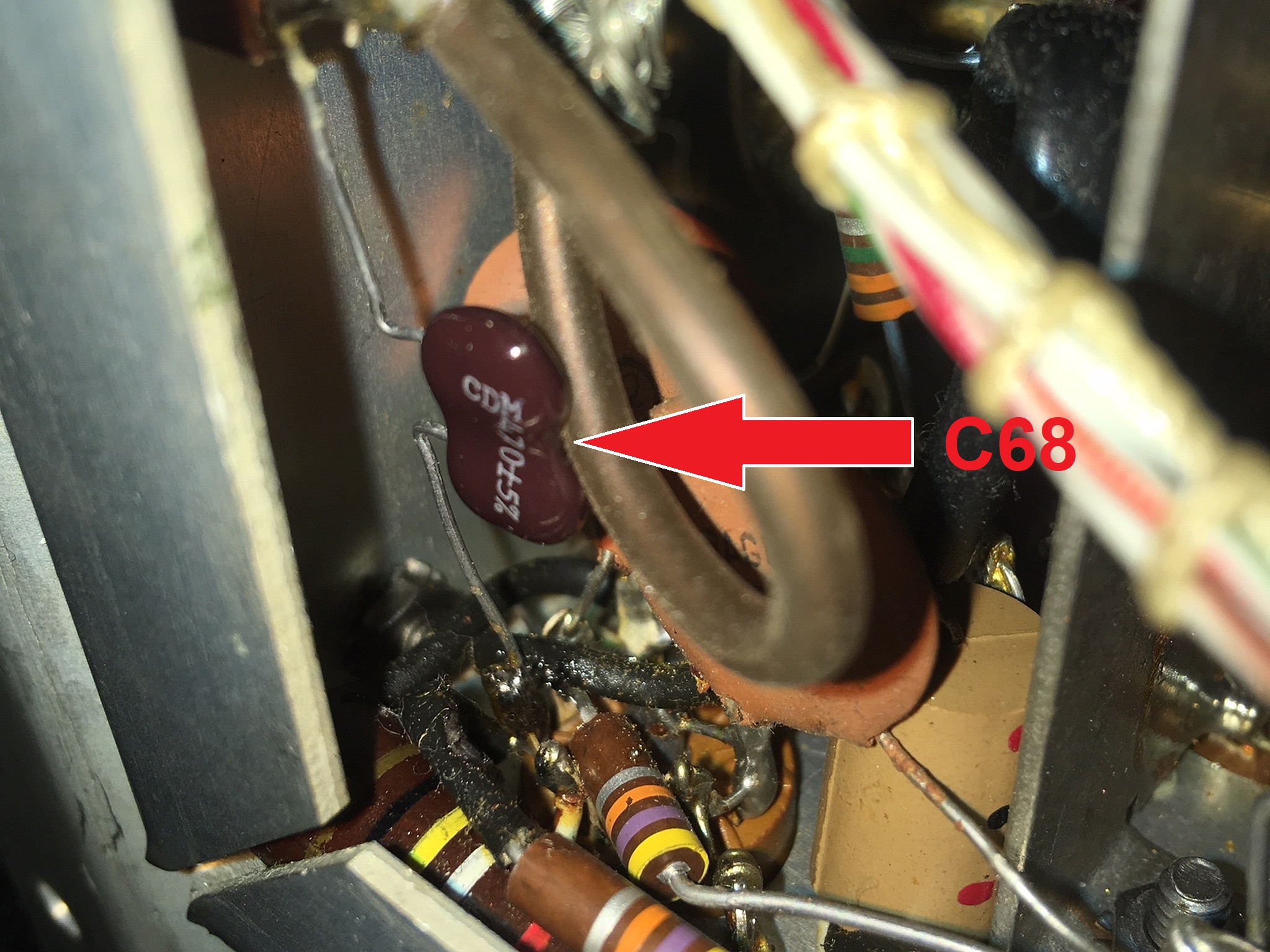 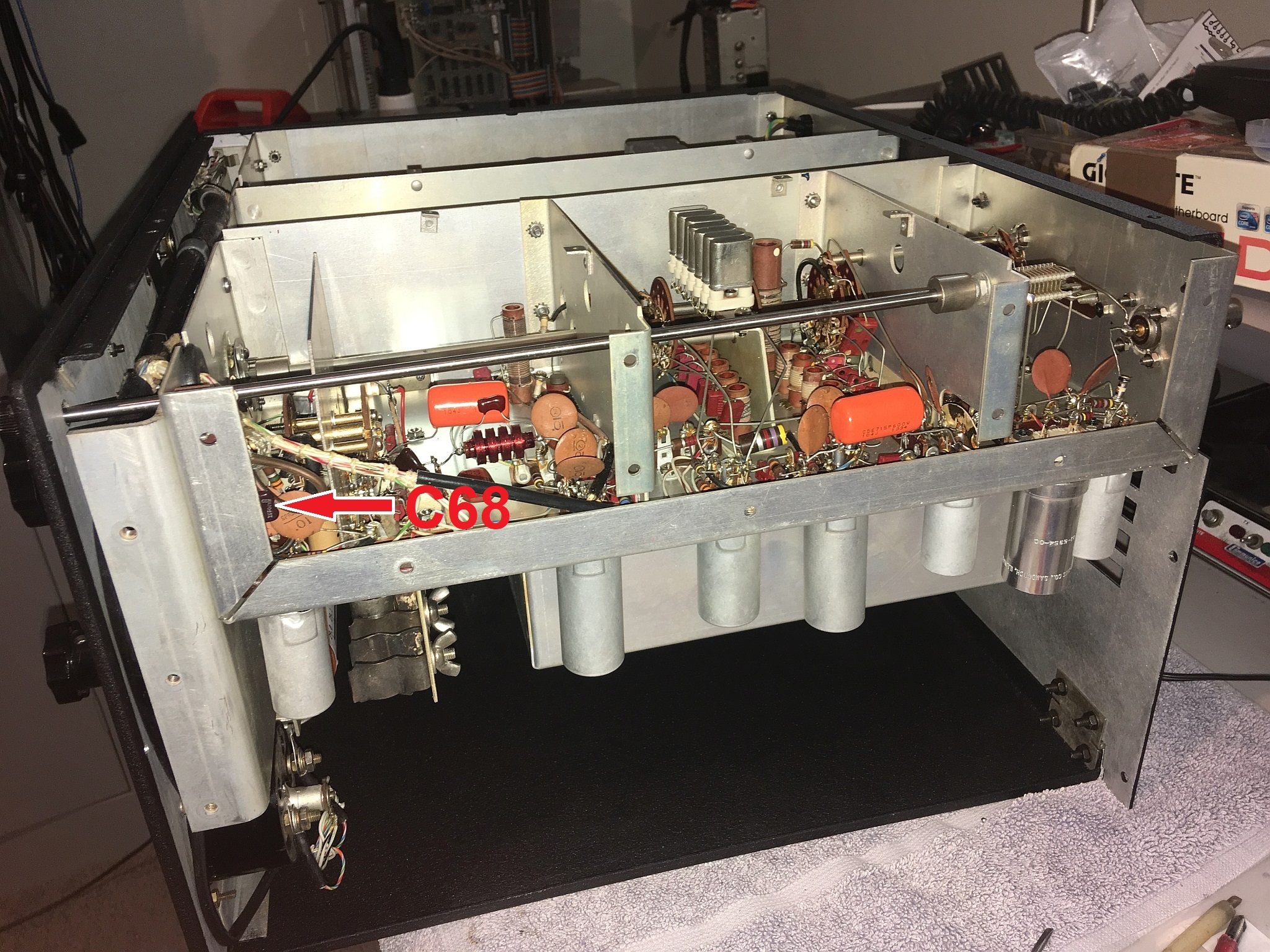 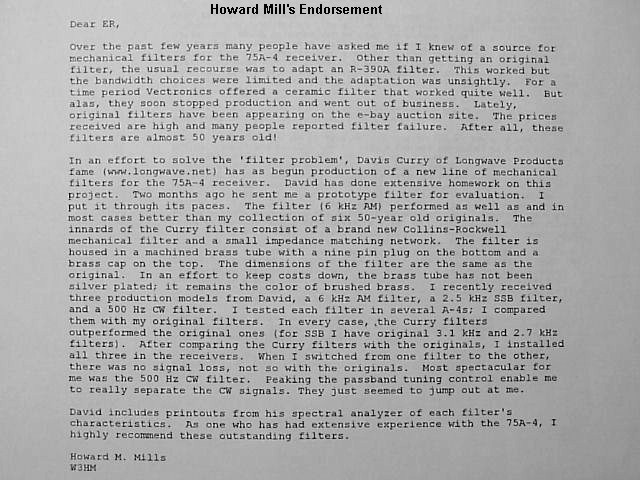 A Collins 75A-4 Receiver Restoration Project

The Collins 75A-4 Receiver is designed expressly for Amateur operation on the seven HF bands  160, 80, 40, 20, 15, 11, and 10 meters. The Receiver retains the time-proven features of the earlier 75A Series notably, excellent image rejection through the use of double conversion, precise dial calibration and high stability provided by the permeability tuned, hermetically sealed Collins VFO and the crystal controlled first injection oscillator and ideal selectivity produced by Collins Mechanical Filters.

Amateur activity on Single Sideband reveals the need for a receiver designed especially for this type of emission with out sacrificing efficiency when receiving AM, CW or RTTY. The new 75A-4 assures best SSB reception in addition to conventional CW and AM.